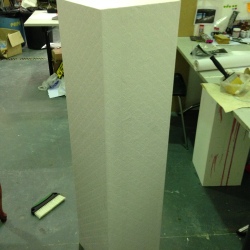 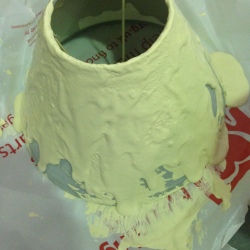 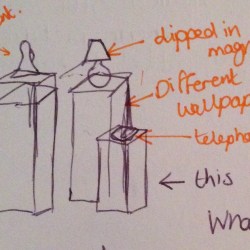 I’m also continuing with the wallpapered plinths. I was really pleased with the aesthetics of the covered plinths so would like to continue this, however rather than just ornamental figures on plinths, experiment with other domestic objects- considering lamps, telephones photo frames etc. I particularly  liked the idea of the lamp. I was imagining the lamp covered in magnolia paint yet the light still shining beneath. The lamp, alongside these other objects, also covered in a coat of magnolia, will emphasize the forgotten objects left behind when one moves home. The objects remain within our memories of that previous home but in reality those objects, those walls have been forever removed from the present. They’ve been painted over and removed. The lights are on but Nobody’s home- a great potential title of the piece.