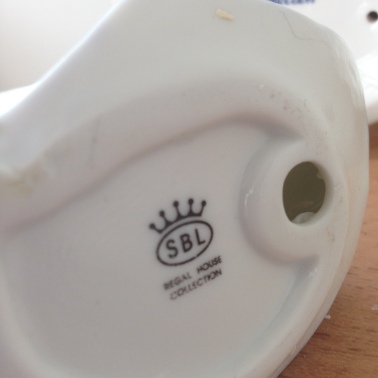 Since the uneasiness of the Untitled format used in previous works and then the too literal format I chose for the show and expose, I’ve been unsure as what to name this piece. In my head I’ve just been calling it The Collection. I want the title to talk of my collection of making, and the idea of collecting within the home, those belongs we keep to reflect an image of ourselves. I suggested during a tutorial the formal title of “A Collection of Appropriated Objects.” But as I thought, it just seemed too serious for the work. I want to play with the idea that these are my grandma’s figurines so why are they now in the art world? it was suggested I look at the base of the figures to formulate a title- finding one that read “The regal collection” as it’s stamp. I quite liked this idea of using this process to create a title. We spoke about where these objects came from, could that be referenced in the title? The Royal Kathleen Collection maybe? Or perhaps The Fenwick Collection -which I particularly enjoyed as it spoke of my own collection of making and my grandma’s collection for her home.