Cumbrian Artist of the Year

Walking into the space on the top floor of Rheged’s award winning visitor centre, I immediately began to look for a theme surrounding the artist’s work. However, be it that the nature of the exhibition is searching for Cumbria’s Artist of the Year, it doesn’t allow for a running theme between artists. The work varies. Its Cumbria’s crisp of the crème. The exhibition shows its visitors that contrary to popular belief not every artist in Cumbria is painting their neighbouring landscape.

This notion is no more present than in the winning artist- Sarah Tew. She may not be subscribing to the traditional landscape painting, but her work is never far away from her roots in Cumbria and its remarkable backdrop. Tew was selected by an expert panel, one of which (Rory Stewart MP) observed this of her work- ‘the winner offered a fresh and engaging take on how we interact with landscape, and I am sure will create a strong reaction from local people.” Tew’s two pieces ‘Blade Printing’ and ‘Stone Mould Series’ on first inspection could easily be dismissed. Being the only floor work, they both demand the space, yet I imagine, often get overlooked by the general public. ‘Blade Printing’ especially, as I watched people walk by dismissing it as a small patch of lawn. Many it seemed thought Tew’s work ostentatious and unworthy of the prize. Ultimately though it was her concepts and wider contemporary practice that made her stand out. Mark Devereux, another of the selection panel, confirming- ‘Sarah Tew is an upcoming artist, her work both within this exhibition and also within her wider practice, displays a deep routed interest in interrogating the rural landscape. Encapsulating both an aesthetic but also a conceptual framework to her practice, we feel she is not only a worthy winner of the Cumbrian Artist of the Year Award but hope this will enable Sarah and her ongoing practice to flourish.’

Not everyone though seemed to agree with this statement. The general public didn’t buy into Tew’s patch of grass becoming a work of art, they desired the skillful and atmospheric work of Alan Stones. Echoing this in feedback- “Alan Stones work is magical and looks at landscape in an insightful way. He should have won the prize. I found Sarah Tew’s work pretentious nonsense.” With an outstanding number of votes- Stones was the People’s Choice winner. He blew the public away with large canvas paintings, displaying incredible talent and just enough narrative to entice his viewer. The painting’s compare with former Turner Prize nominee George Shaw. Particularly his piece ‘Clearing’, in this work he captures an eerie setting, a peopleless painting of a deserted forest. This piece is timeless, without a figure it’s freed from any time or any place. Whereas in his adjacent painting; ‘At Low Tide’, he twists this concept- a figure is present at the forefront of the painting, carrying with him a narrative and something for the viewer to ponder.  It’s these large scale paintings that captivate Alan Stones’ audience. His smaller portrait in the exhibition ‘Father and Son’ is dwarfed by these paintings, so much so I would have thought to leave it out in order to focus on the two prominent landscapes.

So who was my Cumbrian Artist of the Year? I noted earlier that this exhibition diverged away from the common place belief that not every artist in Cumbria is painting their neighbouring landscape, and yet still, I’ve predominately wrote about two artists who are very much influenced by Cumbria’s unforgettable location. My shortlist of artists however have resisted the urge to divulge in this subject matter and confronted other subjects close to my heart- time, place and people. On the wall opposite Alan Stones paintings was my favourite space in the exhibition. To the left was a huge acrylic painting by Alison Critchlow. I was drawn to the painting to inspect the brushstrokes and the remarkable textures of paint. Critchlow’s subject matter being wholly different from the Cumbrian landscape the title explaining this- ‘Drifting Iceberg’. To the right were three small oil paintings, framed by white wood, they narrated scenes of a typical British home, the title informing the viewer that this place was ‘Sandringham Road’. Sandringham Road allowed it’s viewer a brief glimpse into what I suspect is the artist’s home. A real tribute to the notions questioning private v public. My Cumbrian artist of the year however is awarded to Beatrice Hasell-McCosh. I nearly missed McCosh’s extraordinary piece, an unusual fabric piece, the floral fabric is mounted onto canvas and worked into with oils. Drips of paint and a subtle painting of what appears to be a steeple is unassumingly painted onto fabric. The work creates a time and place of its own, it evokes the memories of the Artist and allows the viewer to input their own- be that in Cumbria or elsewhere. 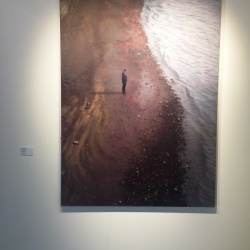 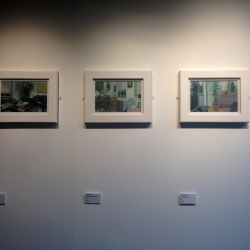 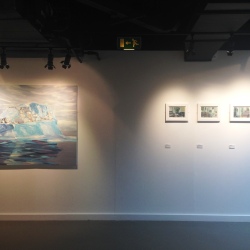 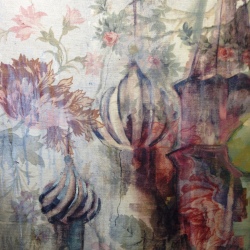